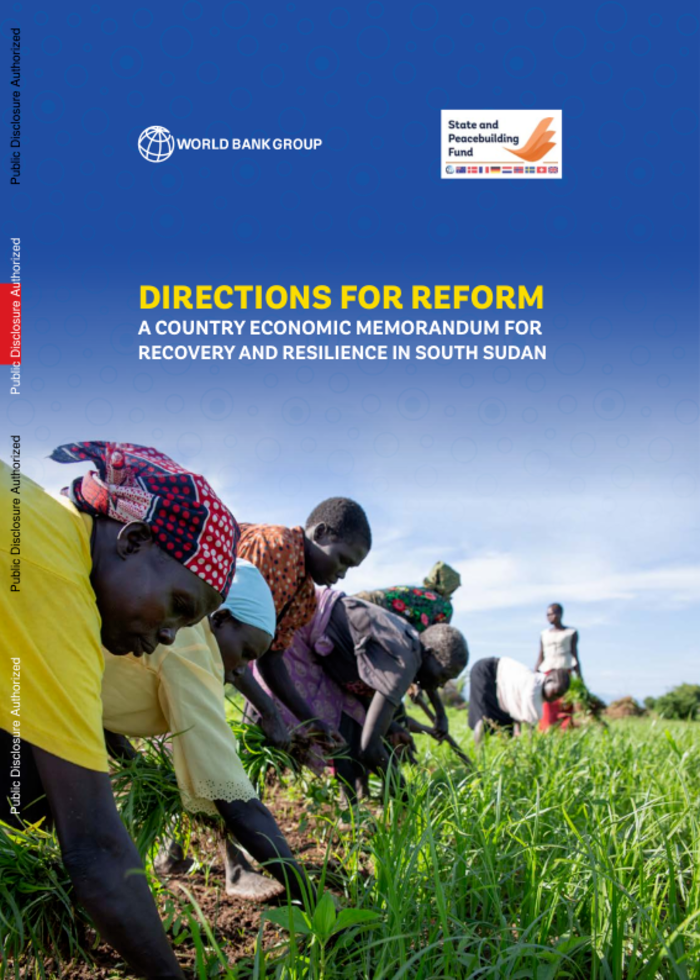 Directions for Reform: A National Economic Memorandum for Recovery and Resilience in South Sudan – South Sudan

JUBA, 15 June 2022—Economic recovery has stalled in South Sudan amid a host of crises, including the COVID-19 pandemic, climatic shocks and declining oil production, and most recently, the negative effect of the general rise in commodity prices caused by the war in Ukraine.

The World Bank’s latest economic analysis for South Sudan, Directions for Reform: A Country Economic Memorandum (CEM) for Recovery and Resilience, highlights the need for the country to leverage its natural capital in the agriculture and petroleum sectors to support recovery and resilience.

Oil and agriculture are the most important sectors of South Sudan’s economy, with oil contributing 90% of revenue and almost all exports, while agriculture remains the main source of income for more than four out of five households. Thus, the report suggests that a focus on the country’s use of its main endowments of natural capital – oil and arable land – is warranted in the early stages of recovery.

“For South Sudan to realize its potential, it will take measures to consolidate peace and strengthen institutions, as well as targeted reforms designed to harness South Sudan’s rich natural capital for development impact as a preconditions for an inclusive economic recovery,” said Firas Raad, World Bank Country Manager for South Sudan.

With weak institutions and recurring cycles of violence, South Sudan remains caught in a web of fragility and economic stagnation a decade after independence. Lack of economic opportunities and food insecurity are major concerns, and are compounded by inadequate service provision, infrastructure deficits, displacement and recurrent climatic shocks

The cost of conflict has been immense, with South Sudan’s real gross domestic product (GDP) per capita in 2018 estimated at one-third of the estimated counterfactual for a no-conflict scenario. However, the authorities launched in 2020 an ambitious reform program aimed at stabilizing and modernizing the country’s public finance management architecture. Thanks to this reform effort, the discrepancy between the official and parallel exchange rates has been eliminated and inflation has come down. To consolidate and expand on these gains, more needs to be done to strengthen governance systems and improve transparency in economic management.

“Three messages emerge from this report. First, there is a peace dividend in South Sudan. South Sudan’s real GDP per capita in 2018 was estimated to be one-third of the estimated counterfactual for a no-conflict scenario. Thus, peacekeeping can in itself be a powerful engine of growth. Second, with better governance and accountability, South Sudan’s oil resources can lead to transformation. Third, South Sudan’s chronic food insecurity could be reversed through targeted investments to improve the resilience of the agricultural sector,” said Joseph Mawejje, World Bank Country Economist for South Sudan.

The CEM makes several recommendations, including:

The Country Economic Memorandum is a World Bank knowledge product that provides an assessment of the country’s drivers of growth and productivity. Against this backdrop, this report highlights what South Sudan can do to support future growth, but it also shows why the country has yet to achieve high levels of broad-based growth alongside peace, stability and a better standard of living for its population. The report also suggests strategic pathways through which South Sudan can break free from its legacy of persistent food insecurity, in a country with enormous agricultural potential.