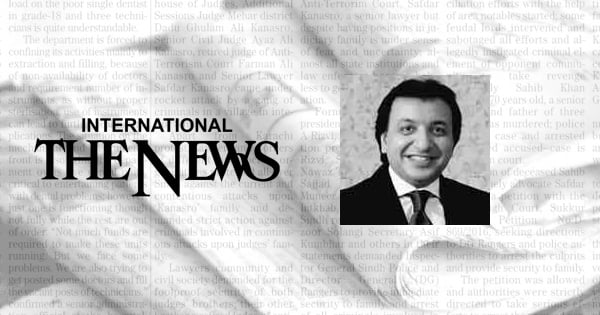 Overcoming the current external solvency challenge is reminiscent of the situation in 2018 in Pakistan. The need to tap into friendly countries to shore up reserves, find oil on deferred payments, new international commercial borrowing, a rush to roll over bilateral and commercial bank maturities, and a push for the International Monetary Fund (IMF ).

The exercise is almost like a page in the playbook. However, it must be remembered that continuing to borrow to fund future recurrent expenditures has a cost. The exercise was needed now, but it’s not a new path for future normal times – it’s an old backward path.

Actions on all of the above fronts must achieve their purpose to create macroeconomic stability and semblance in the markets, even in the short term. The markets are not yet convinced that we have the situation under control. The rupee continues to struggle, the country’s default risk, as measured by five-year credit default swaps, is at its highest since 2013, and the six-month Kibor is at 14.25% – the highest in 13 years – as treasury bill rates approach. 15 percent, the highest in 24 years.

Exogenous circumstances do not help to ease the pressure on imports into Pakistan. The global outlook has deteriorated with geopolitical conflict, supply-side disruptions and a resurgence of Covid in China. Geopolitical uncertainties have disrupted the supply of wheat, corn, gas, oil and metals, as well as driving up the price of inputs such as fertilizers for agriculture. These conditions have led to warnings of a future global food crisis and a possible increase in world hunger. Rising prices have a devastating impact on vulnerable people; the story in Pakistan is not much different. Average inflation reached a high of 11.02% in the first ten months of FY22. The coming months, however, could see even higher levels near 15% depending on the pass-through of the energy and oil prices.

The era of wishful thinking that Pakistan can get out of trouble is long gone. Those who tackle this fact now will feel much less reckless in the future. The growth episodes of 2018 and 2022 are a toss up for policymakers and commentators across the country. External account vulnerabilities have highlighted the balance of payments as a major constraint to sustaining meaningful growth momentum in Pakistan. In both episodes, the country was forced to follow a restrictive path of adjustments over a short period, in order to control the growing deficits. This is a stark reality – one that should shock the nation into reform mode for a new framework for growth beyond easy money, rents, subsidies, amnesties, non-tradable sector incentives, low-value exports and protectionism.

At the same time, the growth prospects of the Pakistani economy are made more difficult by a less favorable global situation in the medium term. The IMF’s revised World Economic Outlook paints a less promising picture than before. It is rare for the IMF to lower its economic growth projections just one quarter into the calendar year. However, it has cut its growth estimates for 86% of its 190 member countries. He warned of a drop of almost a percentage point in global growth for 2022 – from 4.4 to 3.6%. The weaker growth estimates are accompanied by a considerable upward revision to inflation projections. All this bad news is accompanied by growing uncertainty.

We all recognize that sustained social and human progress requires long periods of strong growth. Certainly, countries need to pursue smart growth policies. In the current context, this means growth that is both inclusive and green. Given this understanding, Pakistan finds itself in a difficult position.

To manage an economy, it is not enough to memorize economic statistics. Any smart politician can tell economic numbers. In the end, what really makes the difference are the policies and the ability to pursue the case with the public and a disparate bench in parliament. For Pakistan, it means even more. It means understanding that the engine of growth is broken, fundamentally flawed and in need of reform.

Reforms that improve productivity, efficiency and the budget will need to be put in place urgently at the national level, if there is any chance of prosperity for Pakistan. In fact, the decision to do less is an active decision to see things deteriorate and relegate future generations to a Pakistan with fewer opportunities.

Ideas must find a major role for the private sector and the country’s 220 million people. This does not mean that governments do not have an important task. It is equally important to recognize that government does not always have the solution to all problems. The chaos of the energy sector in Pakistan is a glaring example. A state-dominated energy sector scrambles for imported fuels as the solution lies in the difficult transformation to establish an efficient energy market. The decades-long haemorrhage in the energy sector is simply heartbreaking.

Pakistan is a blessed country. It creates opportunities, when our governments don’t interfere unnecessarily in the lives of their citizens or over-regulate businesses. The first principle of good government is the awareness of its true capacity and its limits. It is crucial that governments balance political risk with political boldness. That said, the policy must aim for the ambition to run the country. In the years to come, whichever government will have to make tough decisions to secure the future – decisions that go beyond opportunity and are truly aimed at building a competitive industrial and agricultural base for Pakistan. . Such a narrative must be explained to the nation.

We must recognize that reforming key sectors will be difficult. It will take a long time, there will be ups and downs, and it won’t always be popular, but it has to be achieved through thick and thin. The dividends will be abundant – lower tax rates, greater prosperity and greater opportunity. The need for reform will have to be clearly communicated to the people of Pakistan, and it will require a reasonable level of cooperation and consent from anyone who objects. This is the task of governing Pakistan.

We must forge the debate and remain optimistic that policymakers and political parties will provide a platform for a competition of ideas to help sustain long-term productivity and efficiency in Pakistan. The next election campaign, whenever it occurs, must be the place where such truths about Pakistan’s prosperity are properly debated and communicated to citizens.

The writer is a former councillor,

Ministry of Finance. He tweets @KhaqanNajeeb and can be reached at: