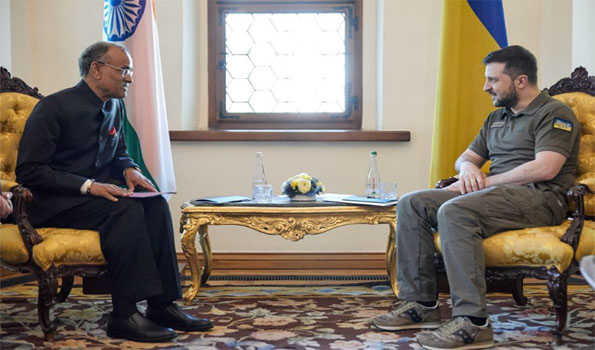 During the presentation of credentials by the Indian envoy, as well as the US and Moldovan envoys on June 2, President Zelenskyy “noted that the easiest way to help Ukraine, who has been resisting the Russian invasion for 99 days, is to be here now,” said a statement from the office of the Ukrainian president.

Addressing the Ambassador of India, Volodymyr Zelenskyy noted that Ukraine and India are united by the belief in freedom and independence. The President quoted the words of India’s national hero Mahatma Gandhi that aptly describe Ukraine and Ukrainians: “Strength lies in the absence of fear, not in the number of muscles in our body. First they ignore you, then they laugh at you, then they fight you, then you win.”

According to the president, relations with India are very important for Ukraine, and he appreciates contacts with the leaders of this country, the statement said.

For his part, Harsh Kumar Jain recalled that in 1996-1998 he worked as second secretary for economic affairs at the Indian Embassy in Kyiv. He noted that he was impressed with how Kyiv has changed and Ukraine’s progress during this time.

The Indian Embassy had returned to Kyiv on May 17, having been temporarily stationed in Warsaw as fighting intensified and thousands of Indians were evacuated from Ukraine.