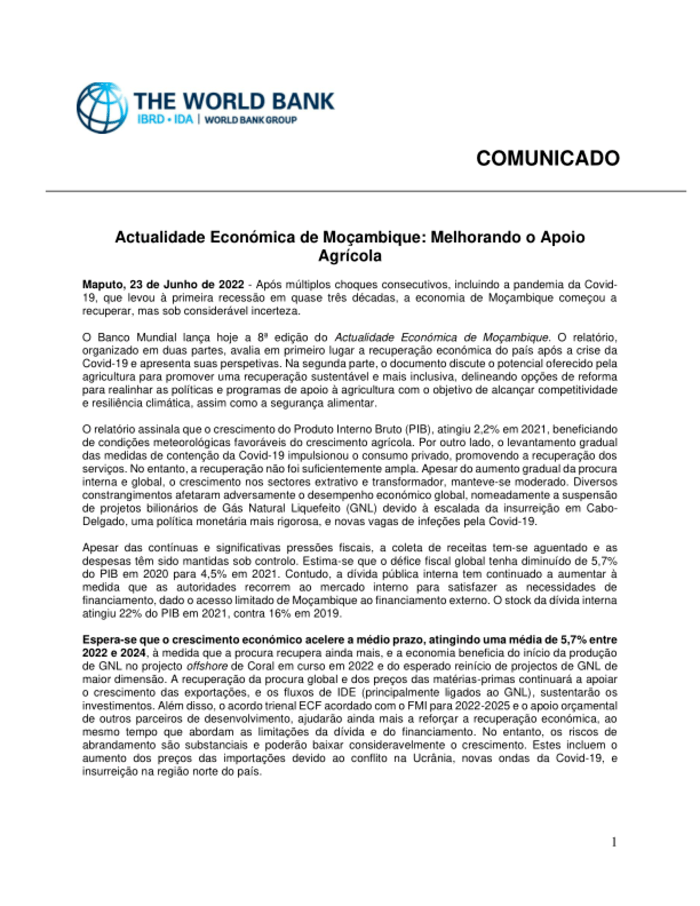 Maputo, June 23, 2022 — After multiple consecutive shocks, including the COVID-19 pandemic, which led to the first recession in nearly three decades, the Mozambican economy has started to recover, albeit in a climate of considerable uncertainty.

The World Bank today launches the 8th edition of its Economic Update on Mozambique. The report, organized into two parts, first assesses the country’s economic recovery from the COVID-19 crisis and presents its economic outlook. The second part examines the potential offered by agriculture to promote a sustainable and more inclusive recovery, and describes reform options to realign agricultural support policies and programs towards objectives of competitiveness, climate resilience and food security.

The report notes that gross domestic product (GDP) growth reached 2.2% in 2021, as favorable weather conditions supported agricultural growth and the gradual lifting of containment measures boosted private consumption, supporting the resumption of services. . However, the recovery was not widespread enough. Despite the gradual recovery in domestic and global demand, growth in the extractive and manufacturing sectors remained subdued. Several constraints have held back overall economic performance, including the suspension of multi-billion LNG projects due to the escalating insurgency, tighter monetary policy and new waves of COVID-19 infections.

Despite significant and persistent fiscal pressures, revenue collection has held up and expenditures have been brought under control. The overall fiscal deficit is estimated to have fallen from 5.7% of GDP in 2020 to 4.5% in 2021. However, domestic public debt continued to rise as the authorities resorted to the domestic market to meet needs financing, given Mozambique’s limited access to external financing. . The stock of domestic debt reached 22% of GDP in 2021, compared to 16% in 2019.

Economic growth is expected to accelerate over the medium term, averaging 5.7% between 2022 and 2024, as demand recovers further, and the economy benefits from the start of LNG production under the project offshore Coral in 2022 and the planned takeover of larger LNG projects. . The recovery in global demand and commodity prices will continue to support export growth, and FDI inflows (mainly related to LNG) will support investment. In addition, the three-year ECF arrangement agreed with the IMF for 2022-2025 and budget support from other development partners will further contribute to strengthening economic recovery, while addressing debt constraints and of financing. However, the downside risks are substantial and could significantly reduce growth. These include rising import prices due to the conflict in Ukraine, new waves of COVID-19 infection and the insurgency in the north.

With the right support, agriculture can be a sustainable source of growth, poverty reduction and food security

Agriculture remains the country’s main economic activity and its agro-ecological diversity could be further exploited to ensure food security. Available data show that agricultural growth would reduce poverty and inequality three times faster than growth in any other sector. Despite its potential, agricultural productivity remains low by regional standards, with Mozambique having one of the lowest cereal yields per hectare.

The economic update offers policy options that could help realign agricultural support policies and programs toward competitiveness, climate resilience, and food security goals. These include:

• Shift agricultural support to public goods and services such as rural infrastructure, animal and plant health services, and agricultural research that can generate higher economic returns — This shift will require the mobilization of financial resources to ensure that it is as neutral as possible vis-à-vis the state budget, while addressing some of the current structural problems related to agricultural public spending (for example, most sector spending is on wages rather than investments) .

• Move towards more competitive agricultural policy support — Mozambican farmers should produce according to market signals and should move towards full participation in regional free trade agreements (SADC and African Continental Free Trade Area—AfCFTA ). The gradual reduction of border measures could be accompanied by direct and decoupled support for farmers who produce protected products.

• Reduce implicit food taxation and increase support for food-insecure households — Mozambican food consumers finance the bulk of support to the agricultural sector by paying an implicit tax due to border protection measures (MPS ). This hits the poorest households hardest. Gradually reducing the MPS would therefore increase the welfare of the poorest.

• Redirect support towards smart subsidies – Producer support could be reformed to allow farmers to choose what they want to produce; supporting the intensification of agricultural production rather than the expansion of areas; and expanding access to safe and nutritious food. And most importantly, integrate climate-smart and nutrition-sensitive agricultural technologies and practices into input and technology support incentives to promote productivity growth, build resilience, and achieve environmental and nutritional goals.