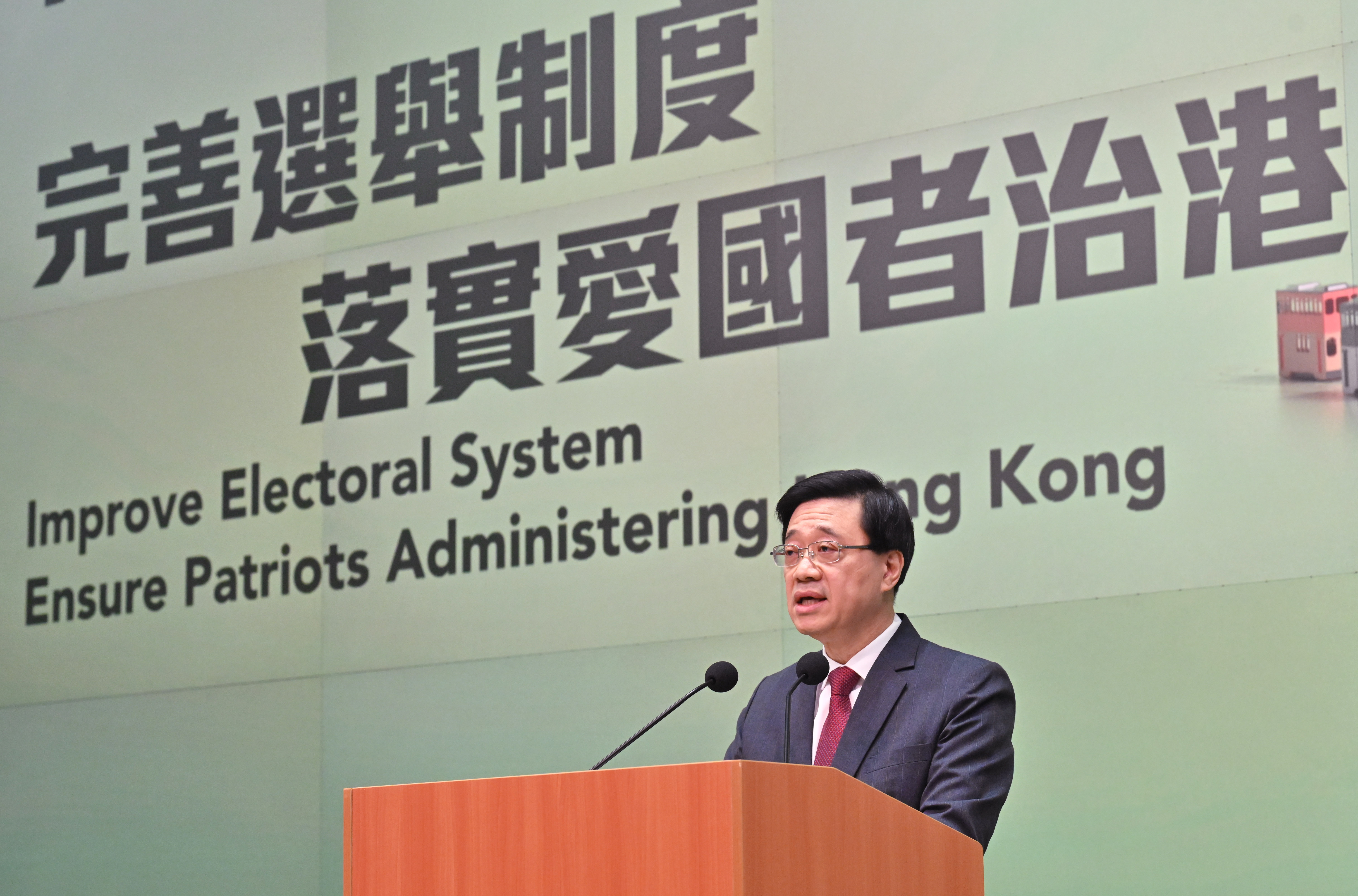 John Lee’s decision to stand for the sixth Chief Executive election in the Hong Kong Special Administrative Region (HKSAR) on April 6, the rapid approval of China’s State Council to approve his resignation from the post of Chief Administrative Secretary on April 7, and the contents of Lee’s press conference on April 9 have significant political implications for Hong Kong.

First, although some media commentators and political elites have expressed surprise at the central government’s immediate support for John Lee’s decision to run in the upcoming elections, a careful analysis of recent career developments de Lee – from Deputy Commissioner of Police (2003-2011) to Under Secretary for Security (2012-2017), Secretary of Security (2017-May 2021), then Chief Secretary (June 2021-April 2022) – has demonstrated that he had a strong track record in handling security issues in the Hong Kong SAR. Many observers in Hong Kong have overlooked the fact that while the People’s Republic of China (PRC) has been experiencing a securitization trend since late 2012 (political security, economic security, public health security, cultural security, to name a few -uns), the Hong Kong SAR was plunged into a crisis of legitimacy by socio-political movements (anti-national education movement in 2012, Central Occupy Movement in September-December 2014, Mongkok riot in early 2016, controversy over the swearing in October-November 2016, and anti-extradition movement in June-November 2019). It is only natural that the central authorities regard security as the top priority of the Hong Kong SAR, especially because external and foreign influences on Hong Kong affairs were considered politically and legally unacceptable under the security law. national law, which was promulgated at the end of June 2020.

According to some reports from Hong Kong, Chinese officials who met with some of the 1,500 members of the election committee, which will select the chief executive, revealed that Mr Lee would be the only candidate in the upcoming elections. If so, it is clear that the Hong Kong SAR is obligated to protect its political and regime security as a top priority.

Second, skeptics who ask whether Mr. John Lee has the expertise in financial and economic affairs have overlooked three issues: (1) previous Hong Kong CEOs (Tung Chee-hwa, Donald Tsang, CY Leung and Carrie Lam) were by no means financial experts; (2) the role of the Chief Executive, as John Lee emphasized in his response to reporters’ questions on April 9, is to assemble a team of knowledgeable and capable ministers to lead the Hong SAR government Kong; and (3) it is traditionally the Secretary of Finance who specializes in financial and economic affairs, with the support and work of the Secretary of Financial Services and the Treasury.

Chinese officials have viewed Hong Kong’s international financial and monetary center as solid and stable. Skeptics of John Lee’s participation seemed to wonder whether Hong Kong’s financial and international status had already declined due to the outward migration of many expats and middle-class locals in recent months. Indeed, the emigration of expatriates and the emigration of Hong Kongers require a more sophisticated immigration policy from the Hong Kong SAR government to attract foreign talent and retain locals – a task that John Lee, if he were elected to the position of Chief Executive, should tackle with a more detailed population policy (attracting what kinds of talent from the mainland, for example) and better higher education training tailored to the needs of the Hong SAR Kong.

Third, what was interesting about this election was that the media continued to spread rumors that (1) Chief Executive Carrie Lam would continue, (2) other candidates would likely run before the news about only one candidate, namely John Lee, is heard. It turned out that Carrie Lam said on April 4 that she had decided not to run for the sixth chief executive election as early as March 2021. Many observers overlooked some earlier political gestures by the chief executive. executive Carrie Lam that she would not continue to run. , including the fact that when she mentioned her family in public in 2021, she got a little emotional. More importantly, at a December 2021 meeting between Carrie Lam and President Xi Jinping, for the first time, the official photo released by authorities did not show them shaking hands, unlike previous annual meetings. Instead, many commentators pointed to the Hong Kong SAR government’s slow performance in handling the spread of Omicron in March 2022 as a “crucial” factor leading to Lam’s “late” decision. not to show up. Nonetheless, there was often an illusion in the media, and among staunch Lam supporters, that she would somehow continue. Her supporters and many observers have forgotten that during the anti-extradition movement in 2019, it was reported by Reuters that she once toyed with the idea of ​​resigning as chief executive – an idea rejected by the central authorities. In short, many analysts of Carrie Lam’s movements were inaccurate primarily because of their failure to carefully observe her actions, including the important meeting between her and President Xi in December 2021.

Fourth, some media have also been mistaken in predicting that there will be other suitors, such as former CEO CY Leung and financial secretary Paul Chan. When news reports highlighted the central government’s intention to appoint Leung as the organizer of the election committee, it was clear that such a move would mean that only a Hong Kong person with the state-level leadership can take charge of a such a prestigious post and a highly respectable political position. The convener is supposed to be politically above the election of the chief executive. Moreover, when Paul Chan publicly stated on the afternoon of April 6 that he wished John Lee “sweetness in everything,” it was clear that Chan was unlikely to run for office.

Perhaps some business elites hoped that Chan would run for office. But as news reports revealed that Lee would be the only candidate, many business elites began to publicly voice their support for him.

Fifth, John Lee secured campaign assistance from Tam Yiu-chung, a Hong Kong member of the Standing Committee of the National People’s Congress of China. On April 9, Tam said he hoped to get at least 500 nominations for Lee and that Lee would hopefully get a high vote count in the election. Tam’s remarks were politically significant, meaning that the Nominations and Elections Policy aims to gain a high degree of legitimacy for Mr. John Lee through a large number of nominations and votes.

Sixth, a careful reading of the composition of the 17 directors and deputy directors of Lee’s campaign office shows that they include lawmakers and some pro-Beijing elites. From the united front’s perspective, his campaign office is run by a group of patriots who will help Lee secure a high number of nominations and votes in the election. It remains to be seen who will be the patriotic elites appointed to ministerial positions and the members of the senior Executive Council (ExCo) of policy-making. Predictably, some core members of the Progressive Democratic Alliance for the Betterment and Advancement (DAB) of Hong Kong will likely be appointed on a continuous basis to the ExCo and a few senior civil servant positions, including the possibility of “taking over” the Secretary of Home Affairs whose former DAB member Casper Tsui resigned due to his involvement in a birthday party amid the Omicron outbreak.

Seventh, from the point of view of the balance and unification of the different factions in the Hong Kong SAR, it would be important to observe how many ministerial and ExCo positions would be occupied by several factions of Hong Kong politics: at namely (1) DAB, (2) pro-Beijing Federation of Trade Unions, (3) fragmented business elites, (4) mainland-born Hong Kongers some of whom were elected to the Legislative Council in December 2021; and (4) professionals who are not affiliated with any political group or party. The business elites remain fragmented and are made up of members of the Liberal Party, the Business Professional Alliance and other unaffiliated individuals. It is likely that some directors and deputy directors would pressure John Lee to select their recommended elites to be the ministers and members of the ExCo, but the last word would be the central authorities. In short, the staff appointment policy deserves our attention.

Eighth, since the PRC is governed by a single ruling party and faction, central authorities would naturally like to consider a more unified ruling coalition under John Lee. Lee said at the April 9 press conference that he would like to have a united team building up Hong Kong’s competitiveness, delivering results and laying the foundation for stability. The results-based governance philosophy will depend on whether members of the ruling coalition will remain united, coordinate effectively with each other, and communicate effectively with the public. While the National Security Law and its implementation will undoubtedly provide the foundation for stability, it remains to be seen how Hong Kong’s competitiveness will be preserved in the face of challenges from emigration and the demand for economic integration. in the Greater Bay area.

In conclusion, John Lee’s participation in the sixth Chief Executive election in the Hong Kong SAR has important implications. This signals the top priority of national security and the regime that Beijing adopts in its policy towards Hong Kong. This proves that skeptics who question John Lee’s credentials have swept under the rug that while China sees no problem in Hong Kong’s status as a financial and international center, the financial and economic development of the SAR Hong Kong has traditionally been the portfolio of the financial secretary rather than the chief executive, who is the leader in the team building and ministerial training process. Hong Kong media overstated Carrie Lam’s political “ambition” and understated her priority for her family, while overlooking the important interaction between Lam and President Xi in December 2021. The media quest for other potential candidates for the Hong Kong SAR also overlooked the fact that the central authorities do not want to witness factional fighting in the election of the Chief Executive of Hong Kong. The challenge for Lee and his supporters, however, is getting high numbers of nominations and votes in the election. Above all, in the process of rebuilding united front work among the fragmented and fractured elites of the Hong Kong SAR, John Lee will not have the easy task of selecting his ministers and ExCo members. Yet, with the strong support of central authorities, he is likely to be able to assemble his own team of ministers and advisers so that his goals of improving Hong Kong’s competitiveness, a results-oriented approach and stable base will hopefully be achieved in the years to come. years, if elected chief executive.