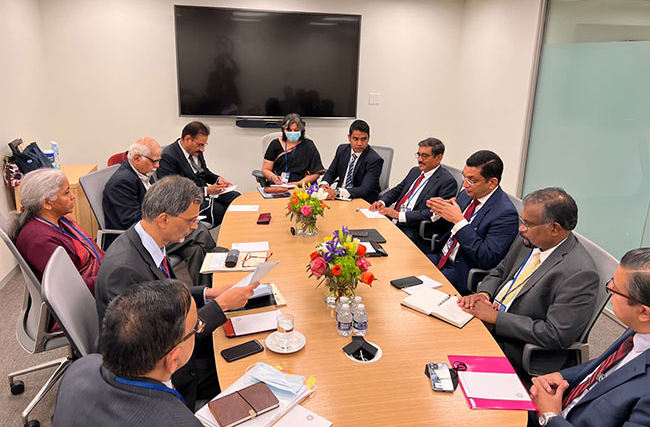 A Sri Lankan delegation, led by Hon. Finance Minister Ali Sabry participated in the 2022 Spring Meetings of the International Monetary Fund (IMF) and the World Bank Group held in Washington DC from April 18-22, 2022. The delegation had meetings with several international financial institutions (IFIs), including the IMF and the World Bank, as well as bilateral partners during their stay in Washington DC.

The discussions mainly focused on the current critical situation of the Sri Lankan economy, as well as the policies and measures to be implemented in the immediate, short and medium term. Key areas discussed included (a) addressing the immediate need to re-establish supply chains for critical items including fuel, LPG and pharmaceuticals, (b) securing bridging funding in the interim period until that IMF financing with an economic program be finalized, and (c) implement short- and medium-term policies to ensure macroeconomic stability and facilitate greener, more inclusive, sustainable and stable growth in the country. Views were exchanged on ways to support the population in the immediate term and on the future direction of engagement with Sri Lanka in a more coherent manner.

The overwhelming support, cooperation and solidarity extended to the people of Sri Lanka by all major IFIs, other institutions/agencies and friendly nations has been extremely encouraging at this critical time for the Sri Lankan economy.

The delegation met with the Managing Director of the IMF, the First Deputy Managing Director and the Deputy Managing Director overseeing Sri Lankan affairs, as well as other senior officials at the technical level. The meetings with the IMF focused on obtaining an Extended Financing Facility (EFF) to overcome the current difficult situation of the Sri Lankan economy from a medium-term perspective, following the formal request made by the Sri Lanka in mid-March 2022. A formal request has also been made for a Rapid Financing Instrument (RFI) for consideration by the IMF to secure immediate financing in the country, which will act as a gateway to the EFF. It is important to reach a staff-level agreement on an IMF program as soon as possible, as this will help unlock bridge financing facilities from other IFIs and bilateral partners. Specific topics discussed with the IMF included the debt restructuring process, government revenue and expenditure measures, public financial management, public enterprise reforms and energy pricing, strengthening safety nets security, monetary policy and central bank independence, foreign exchange management, financial sector stability and related policies, and growth-enhancing structural reforms. An IMF mission is expected to organize face-to-face and/or virtual technical meetings with the Sri Lankan authorities in early May 2022 with a view to reaching an agreement in a short period of time on a program for Sri Lanka in parallel with the restructuring process of the debt.

Meetings with the World Bank were aimed at securing immediate foreign financing and providing support to the government to identify the most appropriate policies to implement under an IMF-supported program. The importance of stronger social safety nets to mitigate the negative impact of the current economic crisis on poor and vulnerable segments was also discussed in detail. During the discussion, the World Bank Vice President for the South Asia Region and senior World Bank Group officials expressed their commitment to providing emergency support for essential medicines and health-related supplies, school meals and cash transfers for poor and vulnerable households. The World Bank’s emergency response program includes immediate funding for the procurement of essential drugs, and a total program of approximately US$600 million is expected over the immediate, short and medium term. term, and funds will be made available by reallocating some ongoing projects, triggering the Contingent Emergency Response Components (CERCs) of some ongoing projects, as well as new funding agreements. Support to provide cooking gas, basic foodstuffs, seeds and fertilizers and other necessities is also being discussed.

The delegation also met with the President of the Asian Development Bank (AfDB) and discussed the country partnership strategy and the way forward with a focus on promoting economic activities and improving productivity. and improving the quality of growth by promoting inclusion. The AfDB expressed its support to the government to address the current challenges and move towards green, resilient and inclusive growth. The postponement of the AfDB Annual Meeting which was to be held in Colombo in September was also mooted due to the unexpected and unprecedented situation that Sri Lanka has been facing in recent weeks. Hon. The Minister of Finance will continue to work with the AfDB on the Annual Meeting in his capacity as Chairman of the Board of Governors.

All IFIs, including the IMF, have stressed the importance of maintaining social stability and protecting the country’s democratic institutions to help Sri Lanka effectively manage the economic problems facing the country and people.

The Indian delegation, led by its Minister of Finance, reassured India’s enhanced commitment to support Sri Lanka through several channels, including direct bridging financing in terms of lines of credit for oil and other imports. and carry-over of accrued commitments from the Asian Clearing Union (ACU) as well as support through multilateral agencies.

The delegation also met with the US authorities who also reiterated their strong support for the acceleration of short and medium term programs with the IMF and the World Bank.

The delegation held a series of meetings with the members of the Advisory Council appointed by His Excellency the President on various economic and financial issues.

In collaboration with multilateral and bilateral partners, the Sri Lankan government is developing more targeted and concrete policies and measures, including a robust macro-fiscal policy framework, which, with the support of the general public, should enable the country to overcome the current difficult conditions, solve the problems accumulated in the economy and lay the foundations for a modern, dynamic and strong economy in the future.