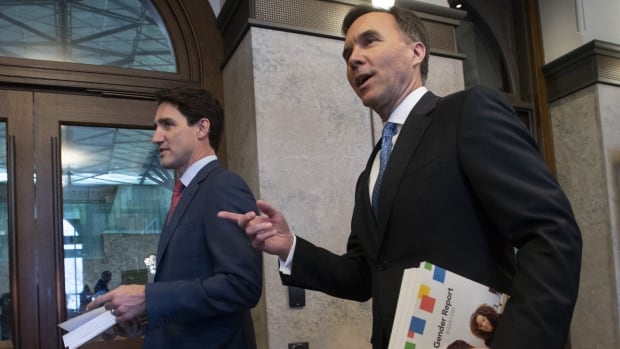 The ballad of Bill Morneau — a call for more economic growth, less politics

Bill Morneau never seemed to like the politics of politics.

This could explain both the the most difficult moments of his tenure as Minister of Finance and some of the complaints he chose to broadcast during a speech in Toronto this week. But that doesn’t necessarily mean he lacks political acumen.

“Politics frankly has nothing to do with business,” Morneau said Wednesday, according to the prepared text of his remarks (all quotes are from the prepared text). “I have a lot more scar tissue after five or six years in politics than 25 years in business.”

Morneau cited the sources of those scars: partisan rivals, questioning by colleagues and staff from other offices, criticism from the press gallery and social media division.

He also expressed concern more generally about the way politics is sometimes practiced and warned of the need to challenge politicians who play “quickly with our institutions” – apparently a reference to Conservative Party leadership candidate Pierre Poilievrewith whom Morneau frequently tangled.

But his most interesting comments were about what he said was happening around him while he was finance minister.

Morneau struggles with government and politics

According to Morneau, a lack of “sustained collaboration with provinces, territories and municipalities” has hampered infrastructure investments. With its first budget in 2016, Morneau announced the government’s intention to create the Canada Infrastructure Bank. He said “a lack of commitment to the idea and the worst instincts of politicians mean it hasn’t had the impact hoped for”.

“With respect to pharmacare, when I suggested that we find a way to work within the current system and focus on filling the gaps in coverage and care, I was drowned out by the impractical voices of advocates who wanted to see global change,” he said. . “And look where we are now. No progress.”

It wasn’t all bad, of course. Morneau also listed his most proud accomplishments, from a national carbon price to reforming the Canada Pension Plan.

These are fascinating comments to hear or read from a former finance minister about a government that is still in power – though it would be fair to wonder if Morneau himself, as Minister of Finance, could have done more to address these issues.

But there were also flashes of naivety in his remarks.

“I find it disconcerting that the government has made new commitments on dental care while the challenge of pharmacare remains unresolved,” Morneau said.

Going forward with dental care was the price to pay to have a confidence and supply agreement with the NPD this should keep the Trudeau government in power until June 2025. This is the kind of compromise that comes naturally with governing.

Morneau praised the Growth Advisory Council — a nonpartisan expert group he created — but said he regretted that its recommendations “have become politicized.” This, of course, is something that tends to happen in politics.

There is something to be said for the permanent “growth commission” that Morneau is proposing, but he took his desire for apolitical saneness a step further when he said that “it is imperative that we depoliticize the important public policy decisions” and “we need to look for other opportunities to decouple politics from politics.”

Technocracy may have its merits, but democracy is probably still the best option. And that means politics.

The rise and fall of a star candidate

It is always useful to ask yourself if things should be as they are. And Morneau is on much firmer ground when he laments the unnecessary divisions that plague public life. Or when he simply says that politics “doesn’t have to be stupid”.

There are significant differences but the rise and fall of Bill Morneau now bears some resemblance to the examples of Jody Wilson-Raybould and Jane Philpott – individuals who established a public reputation outside partisan politics, were elected and were immediately elevated to cabinet, but who broke away from the government on bad terms and came away with rather negative things to say about the whole experience.

Maybe that says a lot about the political system, or about this government.

Again, Jean-Yves Duclos – a well-known economist who immediately became a minister in 2015 – still sits around the cabinet table. Anita Anand – a law professor who rose directly to the cabinet after being elected in 2019 – seems to be doing well.

Maybe future Liberal prime ministers should just remember that it’s the star candidates who aren’t lifelong supporters who tend to voice their complaints if things don’t work out (which is either a reason to avoid star candidates, a reason to make sure it works outside).

The great concern of the former finance minister

But beyond the spilled tea, Morneau used his speech to make a fundamental point about the government he left in 2020 – that it is not focused enough on creating and promoting economic growth.

“So much time and energy has been spent finding ways to redistribute Canada’s wealth that little attention has been paid to the importance of increasing our collective prosperity — let alone developing a way disciplined to think and act on the problem,” he said.

“I had a hard time getting our government to focus on the need for sustained economic growth because it was constantly crowded out by other things that seemed more politically urgent, even if they weren’t. really that important.”

Without knowing what “other things” Morneau had in mind, it’s hard to judge that statement. In worrying about things like competitiveness, productivity and business investment, Morneau joins a chorus of credentialed observers who believe Justin Trudeau’s government is paying too little attention to fundamental economic issues and failing to not create the conditions for robust long-term growth.

The word “growth” was barely absent from the budgets and economic updates Morneau tabled as finance minister. Liberals then and now would say that their handling of issues like inequality and climate change is intended to have the side effect of promoting sustainable growth.

Morneau’s successor, Chrystia Freeland, also submitted a budget less than two months ago, which included a Canada Growth Fund and the promise of a Canada Agency for Innovation and Investment.

Grow the economy or what?

But the plans for this budget have yet to come to fruition – something Morneau’s testimony suggests isn’t always guaranteed. And Morneau has put his finger on what could be the main problem facing the Liberals over the next three years.

Whatever else happens between now and 2025, the biggest threat to the government’s progressive agenda may be the idea that it has no grip on the economy. With the persistence of inflation and the upcoming transition to a clean economy, the economic situation is particularly difficult.

Morneau is also aware of the forces that could coalesce beyond the corridors of power. Towards the end of his address, he spoke of voters who “feel excluded and disengaged” and said leaders must “redouble their efforts to eliminate divisions, bring people together, restore trust in our institutions and restore public confidence”.

These are not bad ideas. But if voters feel left out and populists play fast and loose, progressives have even more reason to make sure they build an economy that is both inclusive and growing.