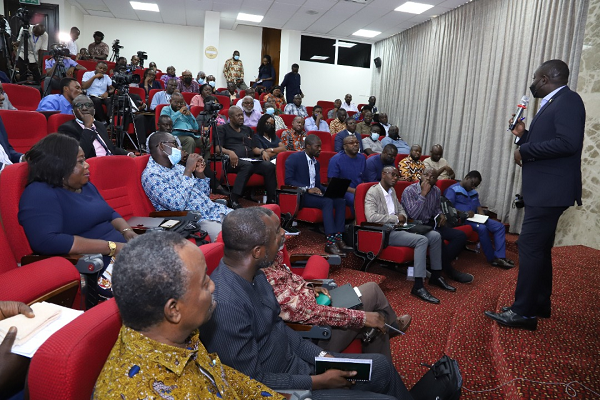 Four electric utility companies are demanding huge increases in electricity rates due to what they say are debt constraints caused by microeconomic indicators such as rising inflation and falling exchange rate over a three-year period, which significantly affected their operations.

NEDCo, on the other hand, which claimed the government owed it over GH¢ 1 billion, also makes a claim of 113%, with the Ghana Water Company also justifying an increase of around 334% as a result of this. the general manager said. some $4.7 billion was needed for the rehabilitation and capacity building of transmission pumps in several communities across the country, as well as for recurrent expenditures.

The Ghana National Petroleum Corporation (GNPC) and the Ghana Gas Company have also made strong arguments on the need for tariff adjustment for transporting gas to power generators.

Stakeholders at a consultative stakeholder meeting, hosted by the Public Utilities Regulatory Commission (PURC) in Accra yesterday, argued that the percentages requested would allow for investment in improving and expanding projects.

It would also help them to be more efficient and provide better service delivery.

Members of civil society organizations (CSOs), academics and the media who attended the forum, however, expressed reservations about the demands, pointing out that the public services did not meet the efficiency criterion to justify the percentages demanded.

In turn justifying why they needed the increases to be granted, officials from the various companies pointed out that the increases were necessary to expand their operational capacity while providing quality service for water and electricity to residential consumers. , industrial and commercial.

The ECG, for example, pointed out that the rate in effect since July 1, 2019 has had a critical operational effect on the procurement of materials, the payment of suppliers, the execution of projects, among others.

The managing director in charge of regulatory management, Sylvia Noshie, was of the opinion that the latest PURC-approved tariff for the company saw a reduction of 14%, “thereby affecting the execution of projects and also delaying payments. on debts.

She also pointed out that the prices of copper and aluminium, which were essential tools for their operations, had risen sharply on the world market, and that the depreciation of the local currency (the Cedi) against the main trading currencies should influence the commission’s decision. to review the proposals.

GRIDCo officials also stressed that they needed the incremental increases to enable them to invest in power grid lines.

Strategy and Risk Compliance Director, Mr. Samuel Kow Acquah, said the company was unable to secure funding for its projects due to low tariffs awarded to it by PURC during from the latest major review. “We hope that the ministry will help us to define policy directions in terms of funding,” suggested Mr. Acquah.

Ghana Water’s Managing Director, Dr. Clifford Braimah, also making the case for his company, pointed out that apart from what was needed to rehabilitate capacity facilities and expand supply, the company owes the government more than 6 GH¢.22 billion accordingly. investments made on behalf of the company over the years.

“And we would have wished PURC had factored that debt component into the tariff increase, given that the percentage terms translate to GH¢28 from the current GH¢5,” Dr Braimah said.

Citing pollution of water bodies as a result of illegal mining activities which he said had also caused silt in the company’s intake sumps in several communities, Dr Braimah pointed out that a lack of the PURC to honor the increase could cause the company to start undertaking work on the water rationing exercise across the country.

CSOs such as the Institute of Economic Affairs (IEA), African Center for Energy Policy (ACEP), Consumer Protection Agency (CPA), among others, were of the view that supplier posture gives the impression that the government and consumers were just throwing money at the problems by considering that the necessary efficiency was not there.

ACEP Executive Director Mr. Ben Boakye, for example, who engaged some of the players in a heated exchange of views, pointed out that the latest tariff approval given to the companies would worsen delivery efficiency, especially from ECG.

“Looking at the graphs they presented, it indicates that they have invested almost $700 million so far, and the former private operator, Power Distribution Services (PDS), was supposed to have invested $5 million. dollars in five years, and if ECG made the $700 million investment on time, where is the efficiency?” Mr. Boakye questioned.

He said that some adjustments were needed due to high exchange rates which had depreciated the Ghana cedi significantly by 32%, it would be important to adjust investments to make them more functional by addressing systemic issues.

Head of research at PURC, Dr Kofi Obutey, said the regulator was collating all submissions from service providers and analyzing the figures so it could advise accordingly.

He said consultative engagements would continue with all stakeholders for a frank discussion before a final decision is made.

“In any case, when the proposals are carefully evaluated, the government will have a say in the final decision on the tariff revision,” Dr Obutey said.